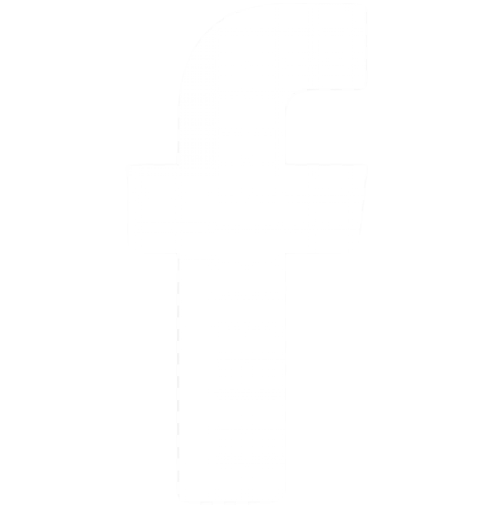 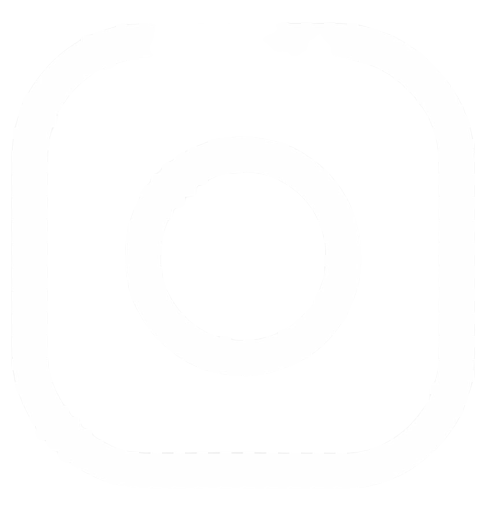 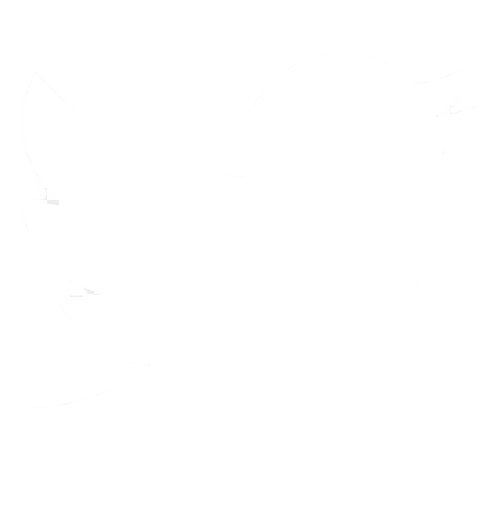 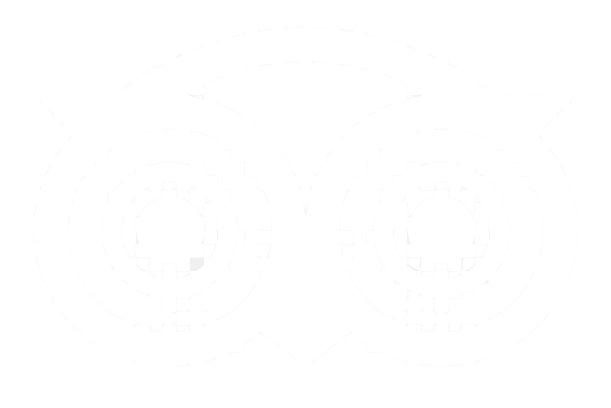 Use this page to read the script as an alternative to listening. For those people who will not get phone reception whilst on the tour, use this link and save the tour on your phone Downloadable PDF for Deaf Customers.

The Tour starts at Jesus green. This was named after Jesus College which is located away from the river.

The gargoyle on the left bank is of Spinola, who was a wealthy businessman born in the 16th century. This stature was created by the same people who made the puppets for spitting image the TV show.

Magdalene College felt cheated by Spinola because he sold some land which they believed that they had a claim to. The original Gargoyle was much larger and let sewage into the river, Magdalene College believed this to be appropriate as Spinola talked a lot of crap. 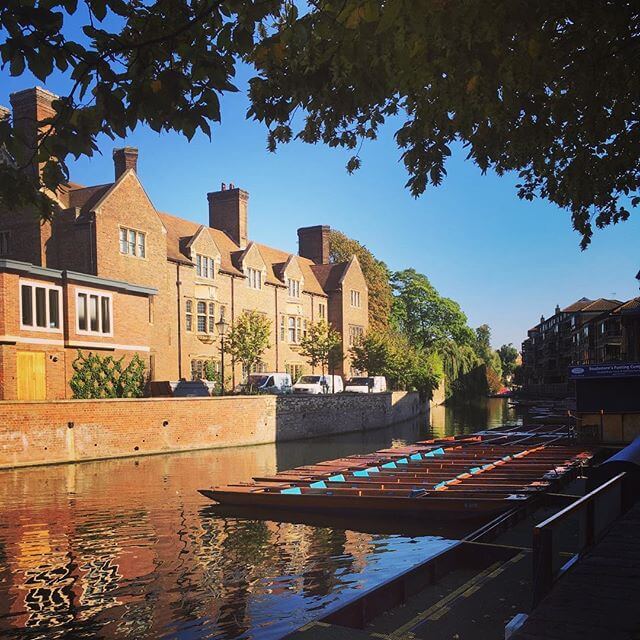 Magdalene College was originally founded in 1428 as a Benedictine hostel. They say that the buildings were positioned on the other side of the river so that the young monks were safely away from the temptations of the city.

Magdalene was the first college to accept foreigners, but the last to accept women in 1988. 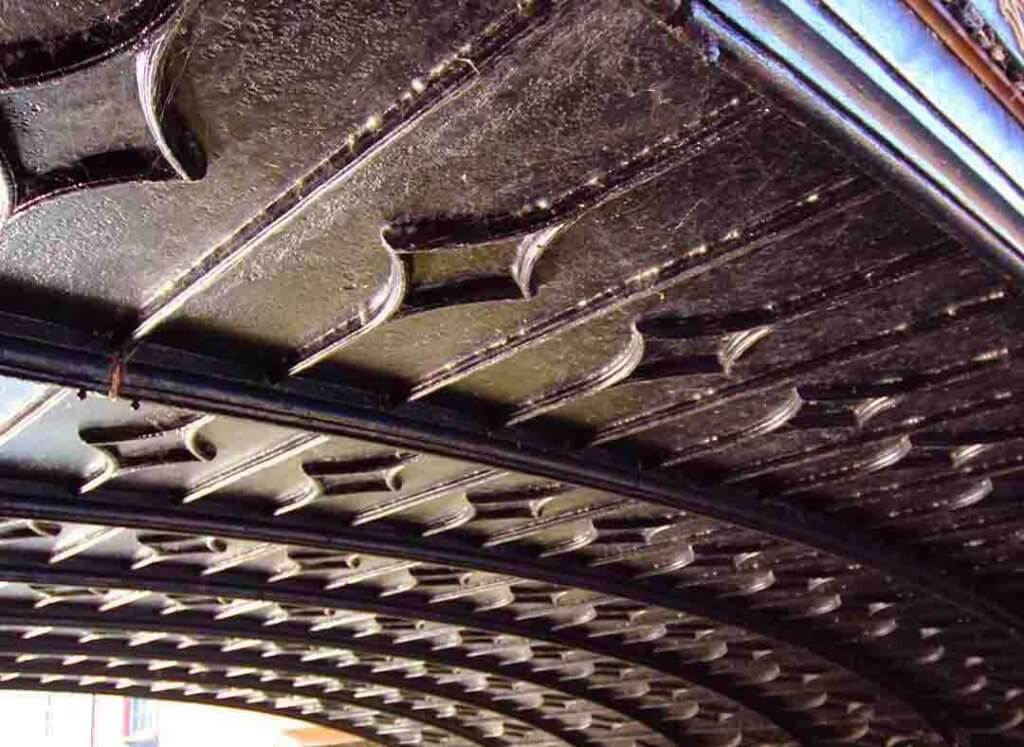 This particular bridge dates back to 1823. This is the site of the original bridge over the river cam, and where Cambridge gets its name.

Before then Cambridge was a much smaller settlement. People used to cross the river much further upstream where the water was shallow. This alternative to a bridge is known as a Ford. 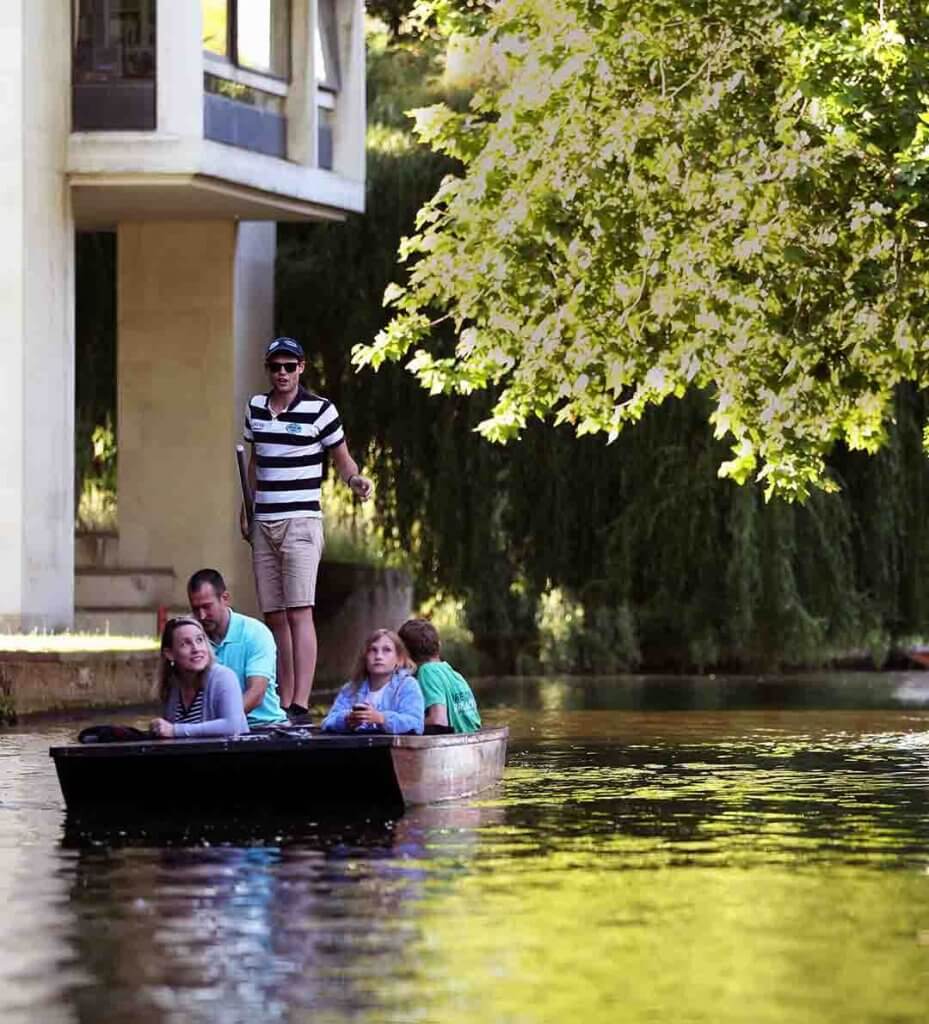 Cripps Court was donated to the college by Sir Cyril Cripps. He invented Velcro and used his existing family business to manufacture it.

He donated three buildings in total, they say that that’s how many it took before they offered him an honouree fellowship. A fellowship is usually only awarded to certain retired academics from the College. Fellows are entitled to various perks such as a free lunch every day.

The Bridge of Sighs 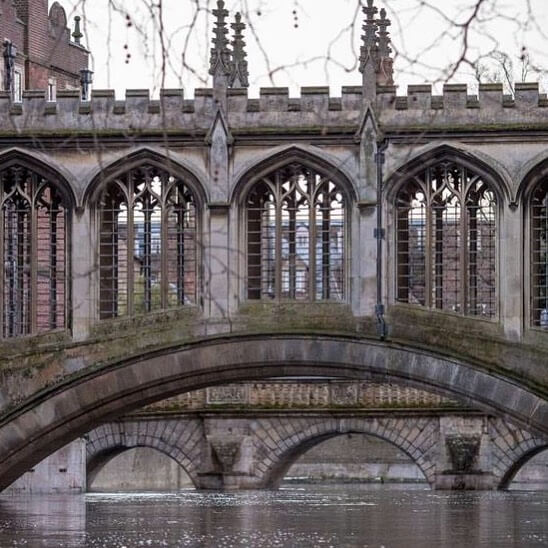 The Venice bridge was the first. They say it was named Sighs because as the convicts crossed they would take a big sigh as they saw the beautiful city for a final time before being taken for execution. In Cambridge the Students are said to face a fate worse than death, as this is the route they take to their exams. 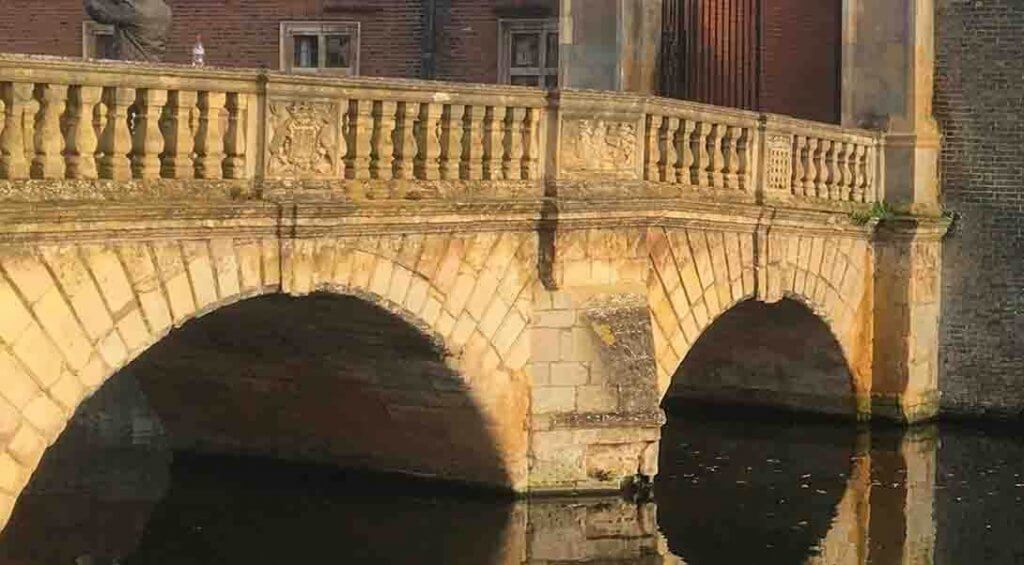 The Wren bridge was designed by Sir Christopher Wren. Wren was a 17th Century Scholar, his most famous design was St. Pauls Cathedral in London.

This Bridge was nicknamed the Kitchen bridge because the food used to be trolleyed across from the kitchens to the dining hall. 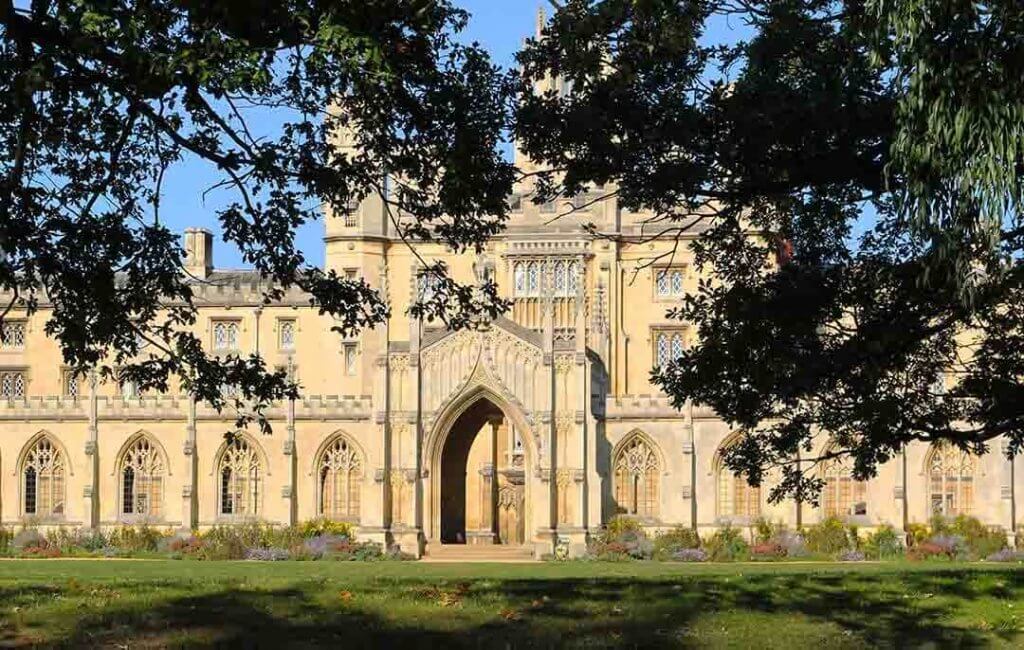 The New Court was built at the same time as the Bridge of Sighs, in a Gothic style.

It is said to be completely symmetrical, right down to the hinges on the windows. This is with the exception of the Eagle which is said to be keeping a watchful eye on Trinity college.

The clock tower is missing a clock. There is no particular reason for this except that the college ran out of money. Several stories have grown surrounding the reason why there is no clock.  The most elaborate story is as follows; Trinity and St Johns both wanted a clock tower, however, the university decided that there couldn’t be two within such a small area because the chimes would interfere with each other. The university decided that the clock tower would be awarded to the winner of the annual rowing race called the bumps. Due to the narrow width of the river on the Cam, the boats depart at intervals and their objective is to overtake the boat in front. As St johns crossed the stern of the Trinity boat, one of the St Johns rowers drew his sword on the cox of the Trinity boat. Despite losing Trinity were awarded the clock tower. St Johns was banned from future rowing competitions, and to this day compete under the pseudo name Lady Margaret. They adopted the college colours, red to represent the blood of the Trinity cox. St Johns invented the blazer, it got its name because the rovers were said to appear to be blazing in the red jackets.

The Wren Library and Trinity College 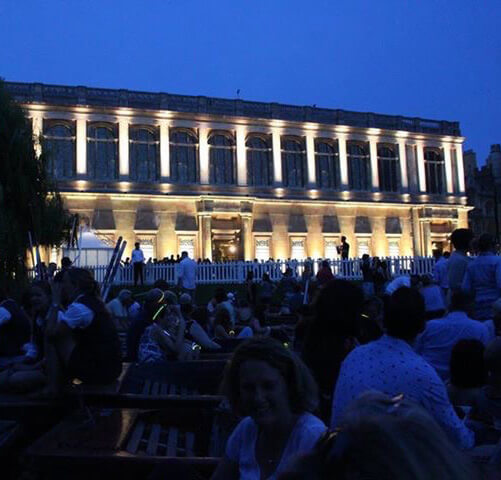 A picture of the Wren Library taken after dark on the river.

The Wren Library was designed by Sir Christopher Wren. The windows downstairs have no glass because the area used to be prone to flooding before modern flood defences. Upstairs the windows are very large and south facing. This was deliberately done to optimise natural sunlight because the use of candles was prohibited in case the fire damaged the valuable documents which were stored inside.

Trinity College spans both sides of the river between the Wren Library and the next two Bridges. It was founded by King Henry the 8th in 1546.  After reforming the Anglican church Henry profited from all the property which the Catholic Church used to own. Henry donated a lot of that property to form Trinity College Cambridge. To this day it remains within the top 5 richest landowners of the UK, apparently, you can walk all the way from Cambridge to Oxford on Trinity owned land. Due to the massive wealth of Trinity College, they are contractually bound to maintain certain parts of the other poorer colleges, however, these days more is spent on solicitors negotiating that actually spent on the maintenance. 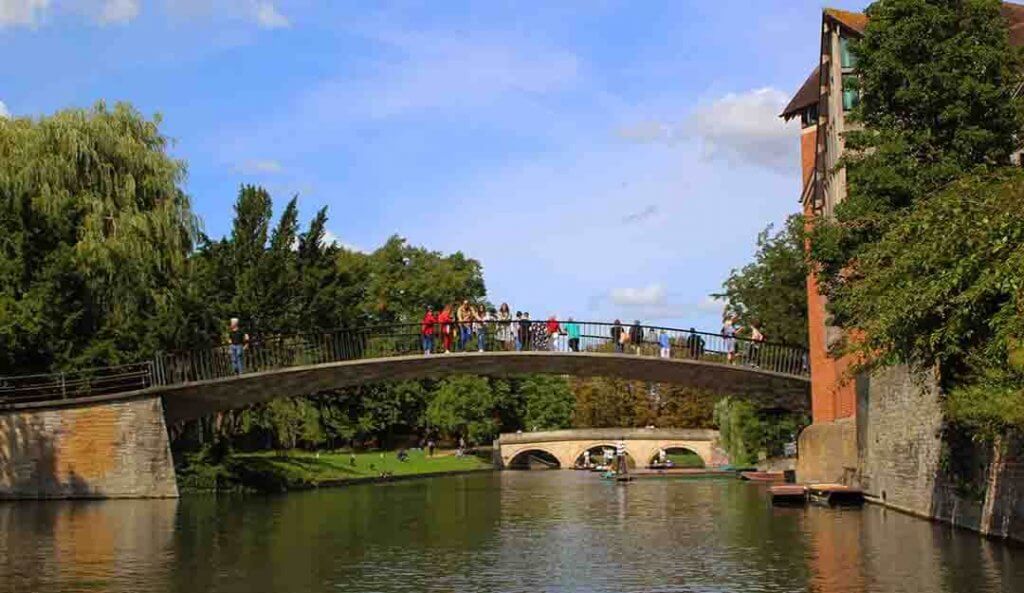 Trinity Hall is the smallest college on the river. It was founded in 1350 to replace lawyers who had been killed by a recent outbreak of the black death. 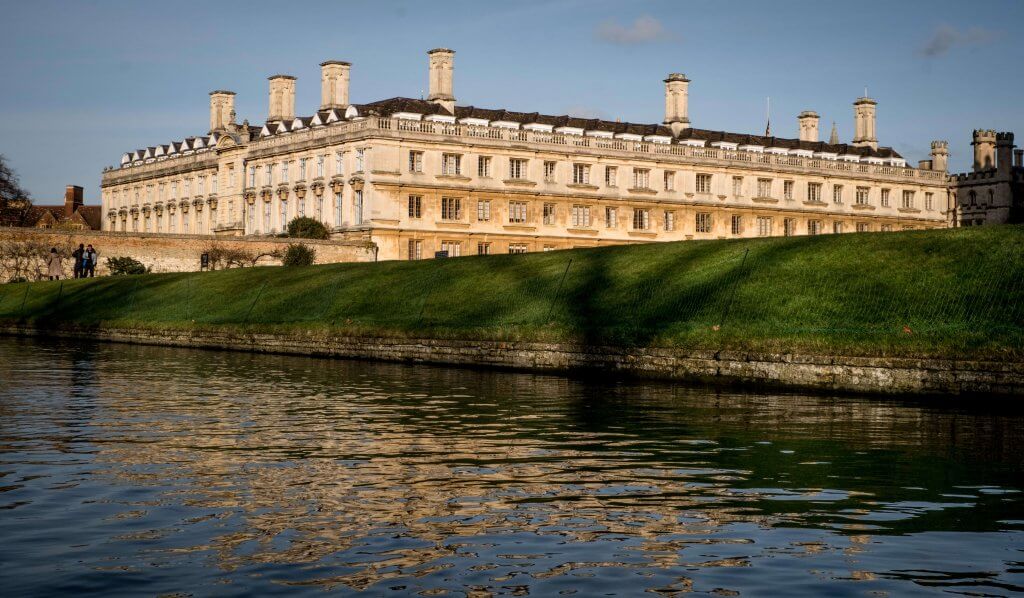 Originally founded in 1326 it fell into debt. It was re-founded 10 years later by Lady Elizabeth de Clare. She was nicknamed the back widow because several of her rich husbands died shortly after marrying her.

The Bridge is the oldest on the river, the rest were destroyed by Oliver Cromwell during the English Civil war. East Anglia was a marshland in those days. Cromwell left only one place to cross in each city so that any peasant uprising could be controlled. 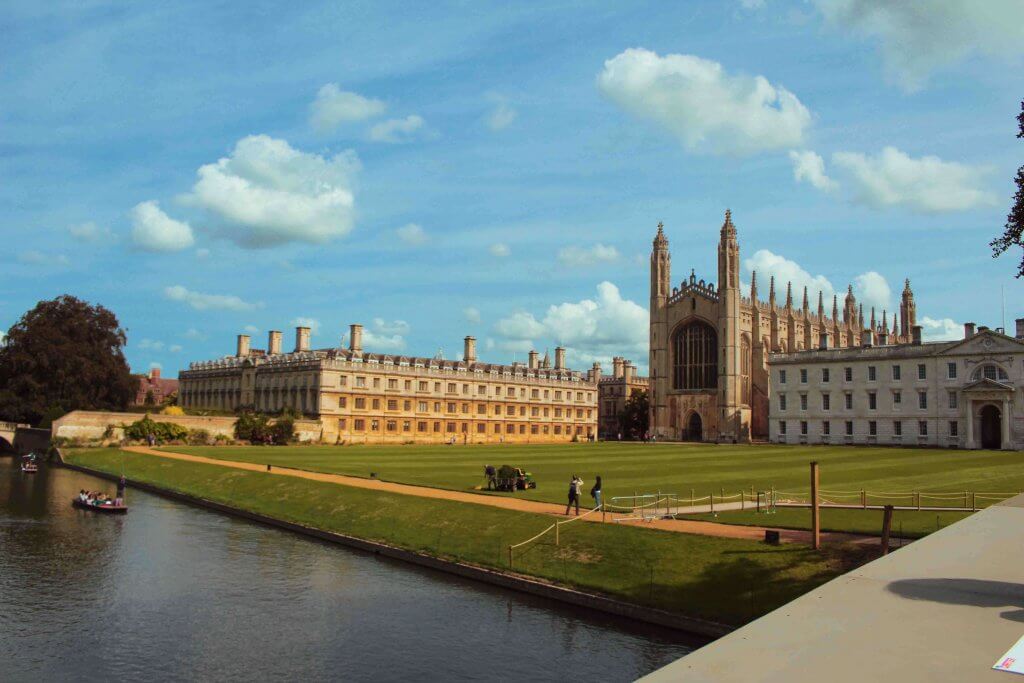 Kings College was founded in 1441 by King Henry the 6th. Its construction was affected by the war of the roses which was a struggle for the thrown between two wealthy families. The country was in civil war, the cost of which slowed down the expensive building process. King’s college was eventually completed during the reign of King Henry the 8th.

The college was originally a finishing school for the top scholars at Eton School. Eton has a reputation as an upper-class private school, however, it was originally for poor children who were often orphans. Wealthy children were not educated as they were considered naturally clever. Poor people were sponsored by the Kings as a kind of charity, they were known as Scholars.

The white building next to the chapel is known as the Gibbs building. It was added later on by the Victorians.

Some chauffeurs say that there was an old law which stated that you could legally shoot an Irishman if they were stood on the bridge. This is a myth, the roots of which probably originate from an old law in Chester where a curfew was set for the Welsh people who had been uprising against the local authorities.

The halls of residence overlook the river immediately upstream of the bridge. Notice the missing statues from the decorative alcoves. These were removed by parliament after they won the English civil war. They were of the puritan denomination of Christianity and didn’t believe in worshipping idols.

This is the very modern building on the left-hand side after Kings College. It was built in 1959 and designed by Sir Basil Spence. It is designed in a modernist style, and not very popular to look at.

Some chauffeurs tell the story that it was designed to resemble the trees on the far bank. It stands on brick built pillars which resemble tree trunks and has windows that reflect light like the leaves of the trees. 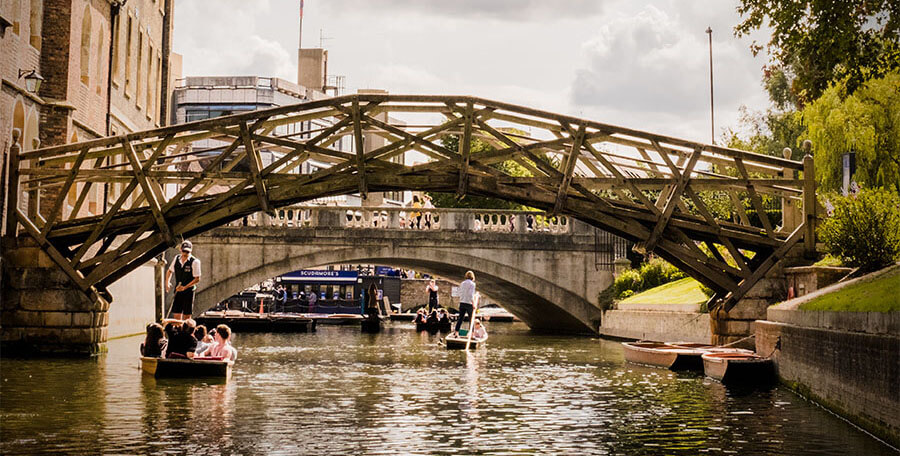 The building itself is very old and dates back to 1416, making it the oldest riverside structure in the city. You will notice some very small windows, this would have been the servants quarters. In those days the poorest people lived on the river because the river was used as a sewer. They used small windows because of a window tax which was introduced in 1696. This is where we get the modern day phrase “daylight robbery”.

The Bridge is called the Mathematical bridge because it uses calculations to get strength from less materials.  It was designed by a man named William Etheridge in 1749, at the time this type of design was unique. It is a common myth that this bridge was designed by Sir Isaac Newton or even Pythagoras. Some punt chauffeurs also say that the original bridge was built slightly differently because it didn’t need nuts and bolts, this is also just a story.

We pride ourselves on a warm, friendly service, offering chauffeured punting tours to meet individual needs and requirements. We offer excellent Cambridge punting deals on shared or private tours of the famous 'Backs' - the historic University of Cambridge colleges that align the river

All our punts are equipped with warm blankets and umbrellas, so rest assured you'll be comfortable come rain or shine. We also offer tours in a number of languages, so please let us know your preference and we'll make every effort to ensure your tour is extra special.